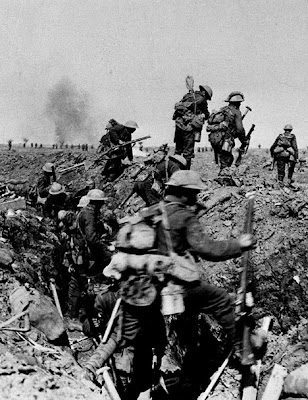 Imagine you are in the trenches of the First World War. It’s muddy, dank and dark. It’s raining all the time and you are never dry. The rations are meagre. Your day starts and ends with the boom, boom, boom of enemy shelling. Some compatriots are being driven mad by the constant pressure, threat and thud, thud, thud of the shells; others are suffering from trench foot, the rotting of the feet over exposed to water. Danger is ever present either through enemy attack or the lunacy of commanders sitting miles behind the front line. The order to “go over the top” running headlong into machine gun fire and shelling could come at any time. When commanders come to inspect the trenches they are remote and clearly not in touch with the realities of your situation; maybe they need to maintain a certain remoteness in order that they can signal the orders that might cause your death.

In this madness you look for any and all survival strategies; you look for anybody or anything that can help to alleviate the grim reality and secure a modicum of safety. As you look over to the enemy trench you catch a glimpse of the men you are fighting. They look somewhat similar to you, they are the same age, they look just as tired and fed-up as you do. They repair their trenches, clean their guns, they shell your lines but they also laugh, they eat, they watch, they do the same things you do day-in, day-out. And as the days and weeks go past you begin to realise they are just men like you, longing to see far away family and children, and dreaming of a homecoming.

And over time you realise that the shells that you put into the artillery everyday are now slightly missing their mark, and you don’t correct them. The next day you notice that their shells are now slightly off the mark and they don’t seem to correct them either. And this becomes the status quo, shells fired and missing, day after day, adding to the futility but contributing security. Then a friend of yours dares to go out behind your line and openly stand up in plain view of the enemy, walking around and then sitting reading a book. No action is taken by the opposite trench. The next morning you see one of their soldiers walking around, you momentarily reach for your gun, but then pause and stop, you take no action. Whilst unwritten and unspoken there is now an agreement across the trenches to act for the greater good of the community – the community of men living under mortal threat sitting in wet, muddy, holes in the ground – a community that is much more real and important than the command structure of the army for which you serve. Sympathy and trust in the common good of the mutually accepted futility of the reality of war creates and maintains a status quo that delivers a modicum of security and fraternal feeling even amongst “enemies”.

I came across the source for this story in Marek Kohn’s fascinating book Trust – Self Interest and the Common Good. He goes into more detail about how these informal arrangements of trust across enemy lines grew up and his book is well worth reading.

Lucian Camp, the advertising, brand and marketing guru (http://www.luciancampconsulting.com/) is fond of saying that trust broke down irrevocably in the First World War as millions of men were sent to their death by commanders who used outmoded and futile strategies seemingly with little regard for human life. Lucian wrote a great blog on Trust. If you agree that the collapse of hierarchy and the established social “order of things”, especially in Britain pre 1914, started during the First World War, maybe this story of trust across the trenches illustrates a move to trust in a more immediate community that is easier to judge and seemingly more important on an individual, real time basis.

We read and hear a lot Web 2.0 and word-of-mouth / peer to peer interactions being powerful marketing and communications tools all facilitated by new forms of internet based communications such as Facebook, MySpace, Twitter, Friendfeed. And whilst undoubtedly true that the pace of change has increased with technology, there has been a fundamental cultural shift happening over the past 100 years from looking upwards trusting in hierarchy to trusting in each other and our community (however one defines this for oneself).

What I think this story demonstrates is that “communities” can be built around important topics or situations without the need for overall alignment on goals – you can support green issues whilst also driving a 4×4 or be a Tweeter whilst not conforming to the 12-18 stereotype. People are inherently a complex mass of differing opinions, prejudices and competing priorities – most segmentation efforts miss this. Also I think it demonstrates that channels of communication go way beyond the obvious and explicit. There are powerful insights to be discovered by analysing the more subtle signals in what we don’t do, as much as in what we do. What does it say about me that my blog is about marketing (my profession) and my Tweets tend to be either happy or professional – what am I not sharing? – and what does this say about me and what I need?

Clearly across the world there is a need to build trust across divided communities. Communications technologies have a powerful role to play in bringing together people who may have opposing goals in a explicit or implicit dialogue for the greater good.
Would love to hear your thoughts on this story, these trends and what you think – please feel free to share, follow and comment.