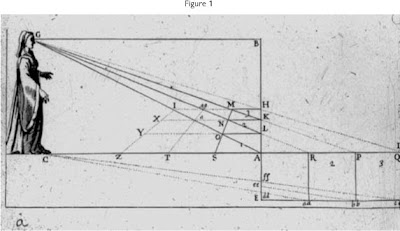 In 1413 Filippo Brunelleschi discovered how to represent the three dimensional world on two dimensional pieces of paper. “Linear perspective” caused a revolution in art that suddenly allowed artists to use paint, brushes and canvasses to create valuable new imaginings that still today add value to the eyes that view them. This new perspective, quite literally, unleashed an emergent way of thinking based on human-centred naturalism that became one of the philosophical underpinnings of the renaissance.

This powerful reductionist system of representing reality through a set of rules and mathematical constructs can illuminate our current economic challenges. We are facing significant challenges today as a consequence of the free markets that have powered our economic and societal development over the past 200 years. Challenges which have never more chillingly been exemplified by the unfettered market dominance of the past 30 years with its 3 year dénouement where we were taken to the brink of financial collapse.

Through the free market system and its invisible hand, we fooled ourselves that we had discovered an infallible system which took the complex multi-dimensional world and its inter-linked human, economic and environmental consequences and by clever perspectives and maths reduced it into two dimensional form. The resulting construction of the free markets markets, a version of linear perspective, where we thought incentives were aligned to create never ending “goods”.

But unlike the great artists of the Renaissance who gave us a lasting form of value through their art we have been proved wrong. Unfortunately it turns out that the incentives embedded in the linear perspective of the markets were certainly not capable of balancing finely tuned impacts in the real world.

This I think will be the emergent conclusion drawn from the experience of the past few years. It is reflected by much of the current debate about new economic and societal models that is moving from the fringes into the mainstream.

The questioning and emergent thinking takes time to filter through the food-chain. Hearts and minds need to time to process and change behaviour. Nowhere is this truer than in big banks. Often these organisations make glaciers seem strategically nimble.

Banks in the growth-obsessed, market-driven economy are the “top predators”, despite all their protestations that they “are doing God’s work”. The banks are the masters of market driven linear perspective. They act on instinct to out-perform the incentive systems they are given. As long as the markets operate within given parameters banks make huge amounts of money because they are so good at conquering the system.

Like a lioness hunting the last zebra on the savannah, they don’t think, they just do. This is why they don’t say sorry for what the real world sees as mistakes. As a pride of lions feast on this last zebra they don’t consider the wrong or right of their actions they act on instinct within a clear incentive structure devoid of any morality or any critical thinking.

If our banks are the top predator then might it be tempting to think that, like lions and markets, banks are amoral? Drawing this conclusion would be wrong. Abdication of responsibility cannot be justified because once the PowerPoint decks and Excel analysis is put aside, all businesses are run and operated by thinking, feeling human beings. Businesses both large and small, bank or not, need to operate within in a moral framework. If they step out of this framework then we should call them out as immoral.

This has been sharply exemplified in different ways in the past week by two very different situations: the unfolding scandal at the premier investment bank Goldman Sachs and much closer to home the FSA report into complaints handling at UK banks. None of the institutions involved will ever say sorry for what any commonsense reading of the situation would be seen as mistakes. Obsessed with the incentives of the markets no bank thinks that anything they do that delivers against the market construct is wrong, irrespective of the wider real world implications.

Goldman Sachs and one particular London based Goldman banker Fabrice Tourre are currently under investigation for a series of trades that the SEC maintain the bank knew were worthless (or “shitty” as one of their bankers described the deal in an email) and therefore broke the rules of the market.

An exchange during the testimony of Mr Tourre with a US Senate Committee was particularly revealing. When asked by Republican Senator Susan Collins whether he agreed that he had “a duty to act in the best interests of Goldman’s clients”? He replied: “I believe we have a duty to serve our clients, with respect to our role as a market-maker, by showing prices to clients and offering liquidity.”

This model of duty offered by this banker is one devoid of morality: the top predator creates the market devoid of any responsibility to think critically about the consequences of their actions. The question that is asked is: Does it allow me to fulfil what I am being incentivised to do? The two dimensional world relies on the blind assumption that incentives are aligned with creating good; no critical thinking or judgment on wider impact is needed. This isn’t just Goldman Sachs and these deals, this two dimensional amoral thinking exists at every trading desk in every major bank in the world.

The next example is much more down to earth. The FSA yesterday released a report into complaints handling at UK banks. This report identifies that most UK banks have “poor standards of complaint handling”. There are many issues identified but most tellingly some of the contributing factors are cultural: senior management not caring and staff being incentivised to make the complaint go away rather than handle it to a satisfactory resolution for the customer.

Complaints and their handling are a perennial problem in banks because the linear perspective of the markets doesn’t value customer satisfaction or “going the extra mile” – it values profit and efficiency. Until banks are measured on and structured to deliver three dimensional balanced real world impacts then complaints will never be resolved properly – it just won’t be important enough in a construct that assumes never ending profit growth is always a “good” and where consumers are inert.

Markets may be amoral but their participants cannot be. As we search for a new model we need to create a more balanced, probably less efficient, set of incentives that we don’t slavishly follow but critically engage in. We need to reclaim responsibility for our individual and collective impact as businesses and brands. Then, like the Great Masters of the Renaissance, we might just be able to create “goods” which last for 500 years and still retain the power to take your breath away.

[This first appeared in the other blog I founded: www.conservation-economy.org]