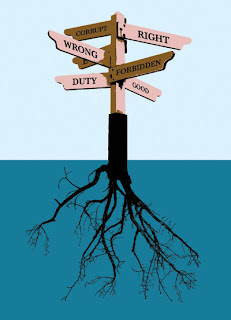 Yesterday I attended a talk at the RSA by John Lanchester who has recently written a book called Whoops! about the credit crunch.
The talk and subsequent questioning was mostly about the role of culture and regulation in banking; with the audience and speaker exploring how to develop a system that might be more sustainable.
I wrote a blog called Banking and the Common Good a while back which explored how the concept of common good could be placed as a central focus of a financial institution. Today’s blog picks up on some of these concepts.
The question is how we create a banking system that actually balances commercial objectives with social objectives that deliver benefit to the common good. I believe that a new language of responsibility needs to be imposed on the banks. Nearly all banks will tutor their leaders in Business Ethics; all banks have values statements that will include some version of “doing the right thing”. 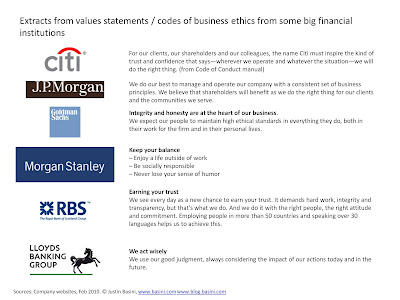 But despite these words and intentions we still have a system that doesn’t in aggregate and from a macro-economic perspective deliver “the right thing” and act ethically in its impact. The frustration is that there are very few financial institutions that deliberately act in a clearly unethical way decision by decision, action by action, but in aggregate the effect is destructive.
The heart of the issue for me is one of what banks, especially investment banks, markets focused institutions and bank leadership more generally, value. And that is money, to this everything else is subservient. This is why banks are so successful, they have created extremely efficient systems for maximising profit to the exclusion of virtually all else. This creates inattentional blindness, which is the psychological phenomenon of being “blind” to anything apart from that which you are concentrating on, add hubris and you have a system that builds risk and is narrowly focused on one immediate outcome.
This valuing of one outcome only, with little assessment of second and third order effects and impacts, allows for a culture to become devoid of morals. And that moral bankruptcy turned into financial bankruptcy.
So what to do? Remembering that business ethics and values were taught and “on the wall” at our big financial institutions and offered no protection.
I would advocate a complete reversal of the incentive systems at our banks. We need an incentive system that puts most emphasis on demonstrating moral action and joined up thinking rather than seeking risk for greater return. This should be in an overtly, openly discussed moral framework. Leaders in these organisations need to become expert not just in maths and playing the markets, but seeing the impact of their business on different stakeholders and balancing this for commercial and social return.
Morality is at the very heart of our economic system. Adam Smith’s conception of markets was built on predictable outcomes between buyer and seller. The foundations of these predictable outcomes, in a time when regulation and rules of commerce were much less regimented and established than they are now, were moral action from individuals. I don’t think it is surprising that The Theory of Moral Sentiments, that Smith wrote 15 years prior to The Wealth of Nations and the majority of the books in The Wealth deal with how individuals living in society should conduct themselves. In order for the invisible hand, specialisation and the market dynamic to work as a value exchange there needs to be trust and in Smith’s conception this comes from morality.
This morality will need to be imposed. Major financial institutions have regressed back to the status quo, as John Lanchester said yesterday “the system is as risky as ever”. They will never voluntarily accept any balances to their earning power. So this will need to come from changed systems of regulation.
But this creates a paradox in that regulation, with its rule based approach, enables a moral vacuum by replacing human judgement with an attitude of “if we stay within the rules we are acting responsibly”. Ironically the FSA (the UK bank regulator) knew this. Over the past few years anyone working in a UK bank will be familiar with the pre-crash mantra of “principle based regulation”. No longer were we to work just within the “rules” but to their spirit. It didn’t work because it stayed at the surface, and people’s behaviour doesn’t change, in many cases the people need to change.
By changing what is valued in banks this will change who progresses within the organisations. This will be a key to unlock a new system. Let’s open up board positions on banks to a wider audience. What’s clear from the past two years is that having a career in banking behind you doesn’t give you any special insight or understanding so let’s have a more diverse group from environmentalists, to community leaders, to customers, having a real voice in the running of financial institutions.
It has been said that markets are amoral. That maybe true but they don’t work unless their participants act morally. Creating moral financial institutions working for commercial gain and the social common good is the challenge.

For those of you that follow my twitter feed (www.twitter.com/justinbasini) or are member of the Financial Services Forum you will know that I participated in a fascinating debate last week on:

“Is restoring trust between consumers and financial services providers a lost cause?”

I was opposing the motion and Ian Hendersen of Totem was proposing. Whilst I won both the before and after votes, Ian managed to swing 20 or so votes in his favour, so the moral victory was his.

And the truth is he half got my vote.

The issue of trust is a complex one. Definitions are hard to come by despite it being a word that we all use regularly and from an emotional perspective understand – i.e. we can feel trust when we give it or recieve it. When you also ladder in working out the differences between trust and trustworthiness then it gets even harder.

Overall despite a healthy respect for the view that actually trust never existed in the first place (which Ian pushed quite hard) and we shouldn’t try and go back to a “golden age” of deference and blind faith I think this misses the point. Trust, at some basic level, is essential for the efficient operating of any market. We have seen what happens when trust disappears over the past 2 years. These are real effects which can’t be denied.

However I also agree that blind faith is a bad thing, and the internet enables a transparency that has moved us away from deference, which is a good thing (in my opinion). What I actually think is happening is that we are going through the painful recalibrating of our view of the trustworthiness of institutions such as the church, the government and businesses. Ultimately it is a good thing that we have an accurate view of how much trust to put in these people and institutions. I’d prefer to know that some priests are absuers, or some politicians are on the take, and some banks are build on bad business models. And sure this does mean we feel less secure and unsure of our society but would you prefer to stay in the Matrix or find a way out even if that means a harder but more real life? I know which I choose.

I’m going to be blogging about this a bit over the coming weeks so please feel free to comment and share your view.

Hope you are having a great week.